In much of Europe, the Roman Frontier followed the Rhine and the Danube rivers.

To shorten communications, control some areas rich in agricultural resources, and connect the two rivers, the Romans created a land frontier over 500 km long with some 900 watchtowers and 120 forts between the upper reaches of the Rhine and the Danube. The frontier developed in many stages during the second century. By the middle of the 3rd century the frontier had been largely overrun by barbarian tribes.

In parts of Upper Germany a palisade fence, and later a ditch with a bank behind, was constructed for 80 km in a mathematically straight and unbroken line which even today often forms an important and defining element in the landscape. In what is now Baden-Wurttemberg and Bavaria, along the Raetian Limes, a palisade was erected, to be replaced in the early 3rd century AD by a stone wall.

More a guarded border line than a military defence system, the Limes enabled traffic to be managed, movement of people controlled, and goods traded and taxed. Increasing pressure caused by barbarian tribal movements from the east and internal conflicts within the Empire led to the collapse of this part of the frontier in the late 3rd century AD. 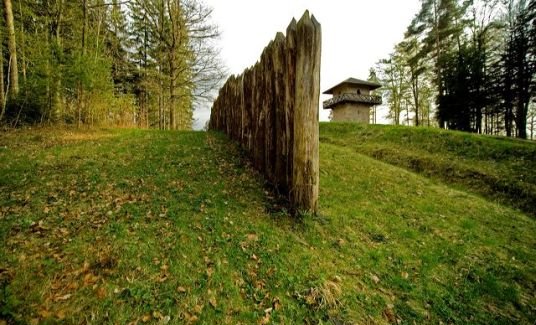 The varied landscapes, through which the Limes line passes, and the fascinating Roman heritage offer great walking and cycling opportunities. Many of these areas retain their special rural character and offer the visitor high quality local produce to eat and drink. Much of the line of the Limes is followed by the Limestrasse road which links many fine traditional towns and villages and there are many signposted footpaths and cycleways. The Limestrasse, or German Limes Road, runs along the Upper Germanic-Rhaetian Limes from Rheinbrohl/ Bad Hönningen on the Rhine to Regensburg on the Danube as a tourist route.

Further information and downloads are available at:

The Limes, Laser and High Tech. The Raetian Limes in Bavaria

Life of a soldier at Ruffenhoffen