Hadrian visited Britain in 122 AD and, according to his biographer, writing two centuries later, was 'the first to build a Wall 80 miles long from sea to sea to separate the Romans from the barbarians'.

Hadrian's Wall epitomises Roman power. It stretched 80 miles from the Solway Coast in Cumbria to Wallsend near Newcastle upon Tyne. In places the Wall reached 6m in height. It took three legions (roughly 15,000 men) only 6 years to build. Hadrian's Wall was a massive feat of engineering traversing rolling countryside, crossing rivers, and hugging the formidable crags of the Whin Sill near Bardon Mill. 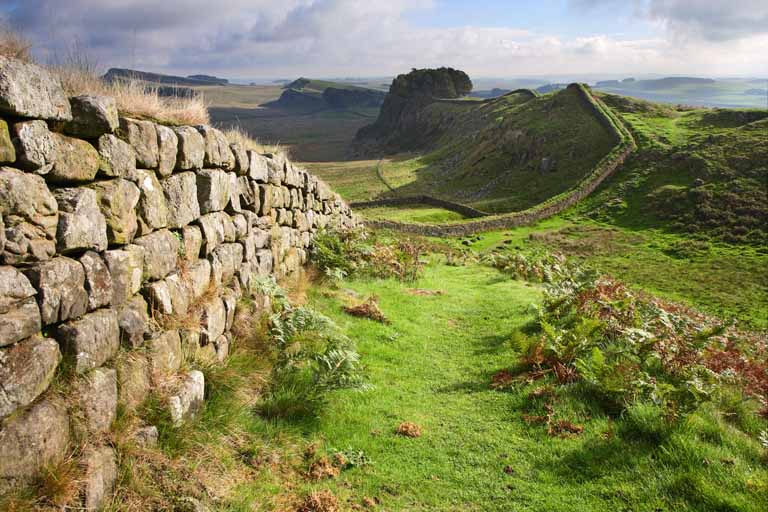 There is a part of Hadrian’s Wall for every visitor, from the stunning reconstructed Roman buildings, family friendly museums and dramatic cityscape of Tyneside, through the classic wild landscapes around Vindolanda and Housesteads, the inspiring and family friendly modern museums and typical Roman forts of Carlisle and north Cumbria, to the amazing seascapes and wildlife of the west coast. Look at the Hadrian’s Wall website to start planning your trip.

For those who want to walk the Wall, the Hadrian's Wall Path National Trail is the long-distance footpath that runs through the World Heritage Site from England's west to east coasts. The 84 miles between Bowness-on-Solway in Cumbria to Wallsend on Tyneside takes in breathtaking scenery as it passes through rugged moorland, rolling fields and the cityscapes of Carlisle and Newcastle upon Tyne.

You can also download a walking guide app to help plan your route and guide you along the Wall.